Peasant-plebeian movement in Reformation strongest was expressed in the Anabaptist movement and the Peasants’ War in Germany 1524-1525. Peasants and urban population (plebs) could not accept Lutheranism and princely Reformation. There were a new sects in the Reformation movement. Anabaptists (re-baptized because they required re-baptism in the mature years of life) were particularly disseminated in the plebeian classes. Some revolutionary Anabaptists preached the abolition of private property and common property.

Among these Anabaptists in Zwickau came preacher Thomas Müntzer and committed to them a strong influence. Spoke out strongly against Luther – “fat skin from Wittenberg,” as he called it – as Luther put faith in the defense of private property and wealth. Müntzer was against the nobility, against feudalism, against class society and the authorities and called for the armed struggle against the utilization of people. Nobles and priests must leave the castles and palaces, begin to live in ordinary houses and live like all other people.

His teachings have been shaped by his religious sermons with quotations from the Bible. He quickly became a leader of the Peasant Movement in Reformation, but, along with his followers, was expelled from Zwickau. The group was later dispersed all over Germany, but continued to spread its revolutionary impact. When the Zwickau authorities expelled Müntzer in April 1521, he fled to Prague. He was initially feted in the town when he arrived in June, welcomed as a follower of Luther, with accommodation provided for him and invitations to preach in Latin and German in the University chapels. For unknown reasons, however, by November he was far less welcome. That month he wrote the Prague Manifesto. 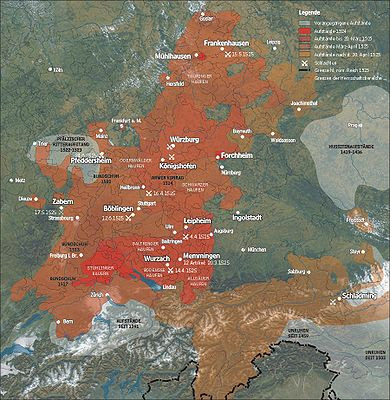 The German  Peasants’ War followed earlier peasants’ uprisings from the end of the 15th and early 16th century. The uprisings broke out almost simultaneously in three areas – Swabia, Franconia and Thuringia-Saxony – but were not related. The peasants were non-unique in their demands, because the wealthy farmers access negotiations with the Swabian League of cities and nobles. The peasants met again on 15 and 20 March 1525 in Memmingen and, after some additional deliberation, adopted the Twelve Articles and the Federal Order (Bundesordnung). Their banner, the Bundschuh, or a laced boot, served as the emblem of their agreement. These Twelve Articles were printed over 25,000 times in the next two months, and quickly spread throughout Germany.

The Twelve Articles iterated specific community rights, largely relating to community self-governance. These included the right to retain or remove the community’s pastor, the limitation of tithes and what the tax will pay for, the expansion of hunting, fishing and gathering rights, the establishment of fair and usual leases, rents, and payments, and the elimination of the Todfall, or death tax.

Swabian League had its own army whose commander was Georg Truchsess. He took advantage of the lack of unity and division among uprisers and bring to the end the uprising in Swabia. Relatively easy his army put down the uprisings in other areas. Peasants’ army was losing one battle after another. On 29 April 1525, the peasant grumbling and protests in and around Frankenhausen culminated into an open revolt. Large parts of the citizenry joined the uprising.

When Thomas Müntzer arrived with 300 fighters from Mühlhausen on 11 May, several thousands more peasants of the surrounding estates camped on the fields and pastures: the final strength of the peasant and town force is unclear, but estimated at 8,000–10,000. The Princes’ troops included close to 6,000 mercenaries, the Landsknecht. As such they were well equipped, well trained and had good morale.

They were also experienced. The peasants, on the other hand, had poor, if any, equipment, and except for those 300 fighters who had arrived with Müntzer, many had neither experience nor training. The peasants were caught off guard and fled in panic to the town, followed and continuously attacked by the mercenaries. Most of the insurgents were slain in what turned out to be a massacre. Casualty figures are unreliable but peasant losses have been estimated at 3,000–10,000.

Utterly defeated, captured, imprisoned and tortured, Müntzer recanted and accepted the Roman Catholic mass prior to his beheading in Mühlhausen in Thuringia on 27 May 1525. Under torture he confessed that he believed that omnia sunt communia, all things are in common. His head and body were displayed as a warning to all those who might again preach treasonous doctrines.


Revolutionary Anabaptist ideology is spread even after the end of Peasants’ uprisings. It is particularly fertile ground found among craftsmen in the Netherlands and northwestern Germany. Anabaptists in the Netherlands will play important role decades later in the bourgeois revolution. Under the influence of Dutch experience, citizens of Munster in  northwestern Germany, expelled their bishop and declared the commune in the period from 1534 to 1535. They have abolished money and tried to introduce equality in consumption goods. For 14 months they resisted the bishop’s army.

Kievan Russia: The introduction of Christianity