“Where books are burned, human beings are destined to be burned too.”  Heinrich Heine

An event unseen since the Middle Ages occurs as German students from universities formerly regarded as among the finest in the world, gather in Berlin and other German cities to burn books with “un-German” ideas. Books by Freud, Einstein, Thomas Mann, Jack London, H.G. Wells and many others go up in flames as they give the Nazi salute.In Berlin, Nazi Propaganda Minister Joseph Goebbels gave a speech to the students, stating… 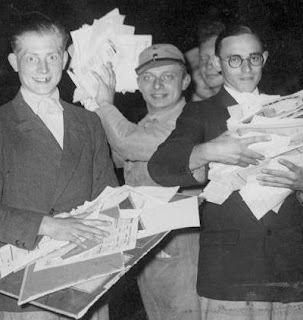 “…The era of extreme Jewish intellectualism is now at an end. The breakthrough of the German revolution has again cleared the way on the German path…The future German man will not just be a man of books, but a man of character. It is to this end that we want to educate you. As a young person, to already have the courage to face the pitiless glare, to overcome the fear of death, and to regain respect for death – this is the task of this young generation. And thus you do well in this midnight hour to commit to the flames the evil spirit of the past. This is a strong, great and symbolic deed – a deed which should document the following for the world to know – Here the intellectual foundation of the November (Democratic) Republic is sinking to the ground, but from this wreckage the phoenix of a new spirit will triumphantly rise…”The speech and book burning were accompanied by the singing of Nazi songs and anthems.
The students, along with brownshirted storm troopers, tossed heaps of books into a bonfire while giving the Hitler arm-salute and singing Nazi anthems. Among the 20,000 volumes hurled into the flames were the writings of Henri Barbusse, Franz Boas, John Dos Passos, Albert Einstein, Lion Feuchtwanger, Friedrich Förster, Sigmund Freud, John Galsworthy, André Gide, Ernst Glaeser, Maxim Gorki, Werner Hegemann, Ernest Hemingway, Erich Kästner, Helen Keller, Alfred Kerr, Jack London, Emil Ludwig, Heinrich Mann, Thomas Mann, Karl Marx, Hugo Preuss, Marcel Proust, Erich Maria Remarque, Walther Rathenau, Margaret Sanger, Arthur Schnitzler, Upton Sinclair, Kurt Tucholsky, Jakob Wassermann, H.G. Wells, Theodor Wolff, Emilé Zola, Arnold Zweig, and Stefan Zweig. 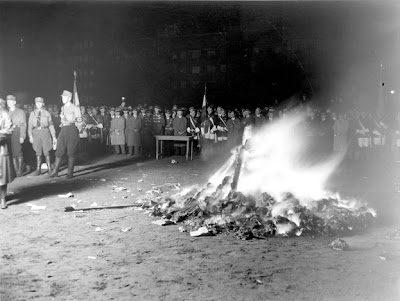 Germany was now led by a self-educated, high school drop-out named Adolf Hitler, who was by nature strongly anti-intellectual. For Hitler, the reawakening of the long-dormant Germanic spirit, with its racial and militaristic qualities, was far more important than any traditional notions of learning.
Before Hitler, German university towns had been counted among the world’s great centers of scientific innovation and literary scholarship. Under Hitler, Germany’s intellectual vitality quickly began to diminish. Truth, rational thinking and objective knowledge, the foundation stones of Western Civilization, were denounced by Nazified students and professors in favor of mysticism, speculation and collective thinking toward a common goal – the pursuit of a glorious future for Germany.

The youth-oriented Nazi movement had always attracted a sizable following among right-leaning university students. Even back in the 1920s they sensed Nazism might be the wave of the future. They joined the National Socialist German Students’ League, put on swastika armbands and harassed any anti-Nazi teachers.
Now, many formerly reluctant professors were swept along by the outpouring of student enthusiasm that followed Hitler’s seizure of power. Most of the professors eagerly surrendered their intellectual honesty and took the required Nazi oath of allegiance. They also wanted to curry favor with Nazi Party officials in order to grab one of the academic vacancies resulting from the mass expulsion of Jewish professors and deans. 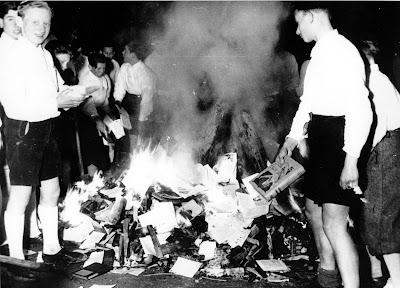 The entire teaching profession throughout Germany, from elementary schools to university level, had been purged of Jewish instructors and anyone deemed politically suspect, regardless of their proven teaching abilities or achievements, including 20 past (and future) Nobel Prize winners. About ten percent of Germany’s university teaching force was sacked in 1933-34, with devastating results for disciplines such as quantum physics and mathematics where Jews had been prominent. The world’s premier physicist, Albert Einstein, settled in the United States along with many other intellectual refugees from Hitler’s Germany. 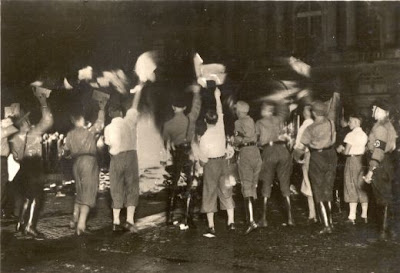 Lovers of truth and freedom who remained behind in Germany only managed to escape through the phenomenon of inner-emigration. The Nazis could never actually know one’s inner-most thoughts as long as one maintained a kind of poker face and didn’t reveal those private thoughts. However, this could also be a dreadfully lonely existence.
Eventually, small groups of like-minded students and professors still opposed to Nazism found each other. They sometimes held clandestine off-campus discussions featuring a free exchange of ideas. One such group based at the University of Munich became known as the White Rose and boldly distributed leaflets demanding that Hitler “return to us the personal freedom which is the most valuable possession of each German, and of which he has cheated us in the lowest possible manner.” Two members of the group, Hans and Sophie Scholl, were arrested by the Gestapo for this and executed. 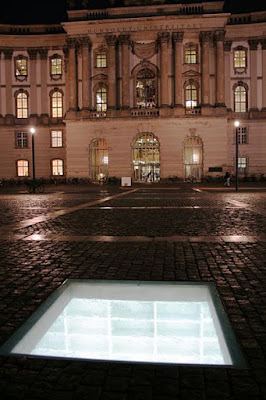 In the college classroom, professors gave lectures amid the nagging fear they might be denounced by one of their students for any reason and possibly wind up in a concentration camp. Politically ambitious teachers sometimes kept secret dossiers on the utterances and activities of their fellow educators which could be turned over to the Gestapo to further their own careers. The widespread insecurity that resulted caused academic timidity which further lowered educational standards. 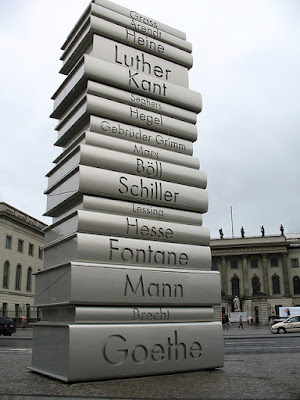 Grammar schools and high schools throughout Germany now had National Socialist teachers of questionable ability forming young minds in strict adherence to the Party motto: “The supreme task of the schools is the education of youth for the service of Volk and State in the National Socialist spirit.” They taught Nazi propaganda as truth and had their young students recite it back from memory.