The practice of actors “blacking up” is no longer seen as amusing or acceptable. The once highly popular television series “The Black and White Ministrel Show”, which featured blackened-up singing and dancing routines from 1958, notoriously fell out of favour and finally went off the air in 1978.

A hundred yers ago, however, the blackface minstrel tradition was a popular variety show genre. It had originated as an American entertainment in the 19th century, and was performed by white people in blackface greasepaint. It often lampooned black people, with stock characters such as “the dandy” and “the mammy”, and presented black people as ignorant, lazy, buffoonish, superstitious, joyous, and musical. 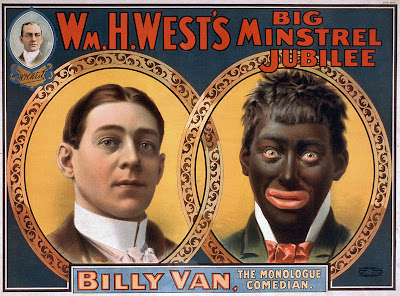 Blackface minstrelsy was the first distinctly American theatrical form. In the 1830s and 1840s, it was at the core of the rise of an American music industry, and for several decades it provided the lens through which white America saw black America. On the one hand, it had strong racist aspects; on the other, it afforded white Americans a singular and broad awareness of significant aspects of black-American culture.
William H. West (1853 – 1902), known as the “Progressive Minstrel”, emulated the British minstrel owner Sam Hague and became one of the first white owners of a minstrel troupe composed of black performers in the United States.
In the UK, one of its most bizarre manifestations was that of the music-hall artist George Chirgwin (1854 – 1922). Billed as the White-Eyed Kaffir, Chirgwin appeared on stage in a white stove-pipe hat, with his face blacked up and a white diamond painted over the right eye. A white tailcoat would be removed to reveal his “naked” black body – an effect achieved with a full-lenght body-stocking. As well as minstrelsy, his show included singing in a strange falsetto voice, puns, clowning, playing the fiddle, clog-dancing and cheeky backchat with his audience.
As an infant Chirgwin had performed in his family’s troupe of blackface minstrels, who begun as street buskers and appeared in music halls in the 1860s. With the eccentric solo act that he first developed in the 1870s, George continued his career for four decades, touring throughout Europe, the USA and Australia. His act would be deemed racist and highly offensive today, but George Chirgwin was popular with the theatre-going public up to his retirement in 1920.
Popular entertainment perpetuated the racist stereotype of the uneducated, ever-cheerful, and highly musical black well into the 1950s. Even as the minstrel show was dying out in all but amateur theater, blackface performers became common acts on vaudeville stages and in legitimate drama. These entertainers kept the familiar songs, dances, and pseudo-black dialect, often in nostalgic looks back at the old minstrel show.

As recently as the mid-1970s the BBC screened The Black and White Minstrel Show on television, starring the George Mitchell Minstrels. The racist archetypes that blackface minstrelsy helped to create persist to this day; some argue that this is even true in hip hop culture and movies. The 2000 Spike Lee movie Bamboozled alleges that modern black entertainment exploits African American culture much as the minstrel shows did a century ago, for example.