The spectacular theoretical achievements capped by Newton in the seventeenth century were not repeated in the eighteenth. However, much of importance was done in the realm of theoretical refinement and in the laboratory. 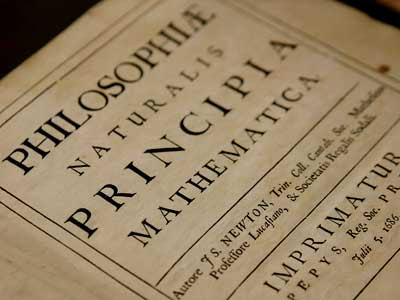 Physics  In physics Pierre Laplace (1749-1827) refined the New­tonian mechanics to demonstratethat the solar system was a self-regulating mechanism. Joseph Lagrange (1736-1813) developed applications for differential calculus and was instrumental in the formulation and adoption of the metric system. Benjamin Franklin (1706-1790) advanced the study of electricity with his demonstration that lightning is an electrical discharge. In Italy Luigi Galvani (1737­-1798) studied the effect of electrical shock on muscles and Alessandro Volta (1745-1827) developed the voltaic cell or battery.

Chemistry Advances in chemistry were among the most notable of the eighteenth century. Laboratory experimentation brought a clearer understanding of the complex gaseous makeup of the air and of the phenomenon of combustion, Joseph Black (1728-1810) isolated carbon dioxide; Henry Cavendish (1731-1810) followed with the separa­tion of hydrogen; and Joseph Priestly (1733-1804) shared with Carl Scheele (1742-1786) the discovery of oxygen. In France Antoine Lavoisier(1743-1794) gave theoretical structure to the experimental work already performed, which earned for him the title “Father Of Chemistry.

Botany Metaphysical assumptions concerning the creation of the universe blocked developments in the biological sciences, which thus lagged behind physics and chemistry. The debate over the proper technique of biological classification reflected a clear philosophic division. Carolus Linnaeus (1707-1778), a Swedish naturalist, used sexual characteristics to classify plants into distinct species and genera. However, Georges Buffon (1707-1788), a French botanist, argued that such a classification fostered artificiality and did not reflect the continuity of the great chain of being, in which all living things are linked. The issue was not resolved in the eighteenth century.

Technology Two technical innovations of the era had a profound practical impact. In both cases the work was done primarily by skilled artisans rather than by theoretical scientists. Thomas Newcomen (1663-1729), a blacksmith, developed a practical steam engine that came into general use in the second decade of the century, Improved versions of the engine provided the motive force for the industrial revolution. John Harrison (1693-1776), a watchmaker, perfected the chronometer that enabled seamen to ascertain their longitude and thus their exact location. This single development had enormous ramifications for worldwide commerce.
Dissemination of Knowledge
The Enlightenment encompassed a small literate elite who lived in a select world, psychologically if not physically apart from the toiling masses. This world was one of leisure and physical comfort, and it allowed the time and resources for intellectual cultivation. 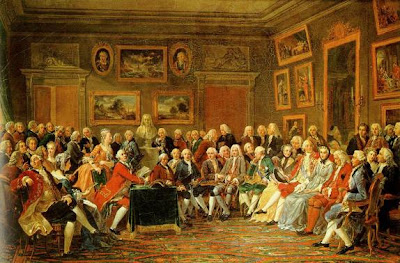 The salonThe salon became a focus of intellectual life in France. Within the rococo setting, intellectually gifted hostesses would draw a group of sparkling intellects into brilliant conversation. The salon, though often catering to affectations, became an important arena for the cross-fertilization of ideas.

Journalism In England the male-dominated coffeehouses (such as the Scriblerus Club, founded by the satirist Jonathan Swift; and the Kit-Kat Club, which numbered among its members Joseph Addison, the dukes of Marlborough and Devonshire, Sir Robert Walpole, and William Congreve) and reading room provided sharper and coarser sounding boards, but the impact was the same. English society was remarkably liberal for its day, and journalists like Joseph Addison (1672-1719) and Richard Steele (1672-1729) were a constant marvel to the French if for no other reason than their ability to stay out of jail. Their Spectator was among the most popular of early English newspapers that provided a forum for the avalanche of ideas and opinions hawked by men of affairs. The same can be said for the Gentlemen’s Magazine and the Edinburgh Review; they both set a very high standard for periodical literature.

The Encyclopedia The greatest single accoplishment in the effort to disseminate the ideas of the Enlightenment came with the publication of the Encyclopedia edited in France by Denis Diderot (1713-1784). The mammoth work, produced in twenty-eight volumes between 1751 and 1772, was designed as a compendium off all useful knowledge. Contributions included so many leading intellectuals that the terms encyclopedist and  philosophe  became virtually synonymous. The skeptical, rationalist Diderot used the Encyclopédie as a powerful propaganda weapon against Ecclesiastical authority and the superstition, conservatism, and semifeudal social forms of the time. Consequently, Diderot and his associates became the objects of clerical and royal antagonism. Though expensive, the Encyclopedia was widely disseminated, and it provided a self-contained library of fact and opinion for members of the „republic of letters“ scattered across the Continent.

Wilhelm Brasse, the photographer in the Auschwitz

First portrait of a criminal published in a British newspaper