Swithun is one of England’s most mysterious saints. No one knows exactly why, 108 years after his death, he was transformed into a saint. The reasons were probably political. Winchester Cathedral  – politically, but not ecclesiastically, the premier church in the land – was the place where many Anglo-Saxon kings were buried. As the “capital” of Wessex, the town was also the political heart of late Anglo-Saxon England.

But the cathedral did not have a dedication to a local saint, nor a holy relic. It was run by secular canons, usually of aristocratic blood, who extracted revenue from the church and were not automatically loyal to the reigning monarch.

In the early 970s, King Edgar (and his most loyal churchmen) appear to have decided to take action. First they turned a long-deceased Winchester bishop (Swithun, allegedly a loyal friend of Edgar’s ancestor, Alfred the Great) into a saint and they proceeded to kick out all the doubtless blue-blooded canons so they could replace them with ordinary monks, renowned for being loyal to the crown. 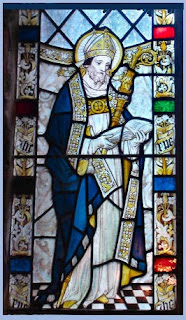 In medieval Winchester, St Swithun was predominantly a healing saint, commonly credited with the power to help heal cripples and the blind. But in popular folklore, he is better known for his association with summer weather on St Swithun’s day (15th Juy) will be repeated for the following 40 days. The idea may have been transferred from two first-century Roman saints, associated with similar beliefs, who were revered in Anglo-Saxon England and whose feast day was the same as St Swithun’s death day.

St Swithun’s shrine and remains were discarded during the Reformation, at the dissolution of the monasteries in 1538. However, 500 years earlier, the saint’s skull had been taken as a relic to Canterbury Cathedral and had subsequently been given to Evreux Cathedral in Normandy. There, unknown to Winchester, it lay virtually forgotten for 700 years, until a member of the Winchester congregation found out about it while holidaying in the French town.

Now there are hopes that the dialog may be opened between Winchester and Evreux cathedrals which could lead to the return or loan of the relic. A specialist from Winchester has already visited Evreux to examine the skull.