Eastnor was built by the 2nd Baron (Lord) Somers, later 1st Earl, between 1810 and 1824. The combination of inherited wealth, his judicious marriage to the daughter of the eminent and rich Worcestershire historian, Rev. Treadway Russell Nash, and his great ambition prompted the 1st earl to commission a castle to impress his contemporaries and raise his family into the higher ranks of the ruling class. Then, as now, the size and splendour of a country house evidenced the standing and fortune of any family. 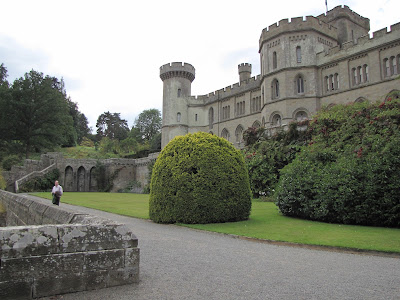 His architect, the young Robert Smirke, who was later well known for his design for the British Museum, proposed a Norman Revival style. From a distance, Eastnor tried to create the impression of an Edward Ist-style medieval fortress guarding the Welsh Borders. It was a symbolic a defiant assertion of power by an aristocrat in a period of fear and uncertainty following the French Revolution and during the Napoleonic Wars.
By most standards, the castle is massive, and the construction team and materials used were on a similar scale. 250 men working day and night were employed over the first six years of building., and in the first 18 months 4,000  tonsof building stone, 16,000 tons of mortar and 600 tons of wood were used. Stone came from sandstone quarries in the Forest of Dean by canal to Ledbury and thence by mule. Estate timber was used as much as possible, but the major roof trusses and beams were cast iron, then relatively new material for building. 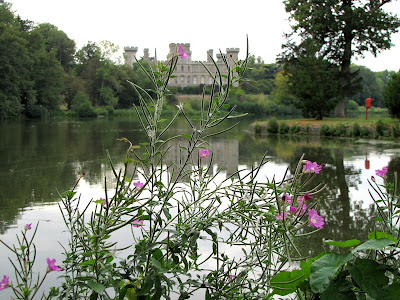 The castle cost 85,923,13s 11d to built: the estimated cost of rebuilding the house in 2009 would be over 30 million pounds. Later plans to built an orangery next to the servants’ wing were dropped because of a shortage of funds. 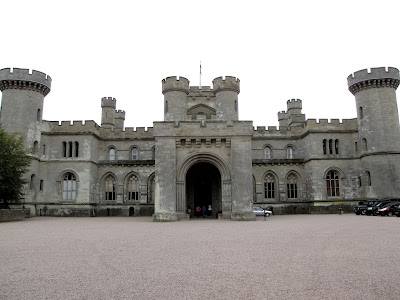 Smirke’s interior were simple and in keeping with the external medieval style: architectural details remain in the Red Hall, Dinning Room and Staircase Hall. In 1849, the 2nd earl commissioned A W N Pugin, well known for designing the Gothic interiors of the Palace of Westminster after the fire of 1834, to redecorate his Drawing Room in the more elaborate Gothic Revival style, before Charles, 3rd Earl Somers, undertook further decorating work in the 1860s and 1870s, so Eastnor, possibly in a unique way, epitomises three successive phases of 19th century domestic taste, Regency Baronial, Catholic Gothic and Aesthetic Italian.
It is possible to trace the evolution of taste through the Victorian period, ending in the Long Library and the State Bedroom, when the fashion had reverted to the Renaissance period. But as the Gothic Drawing Room represented the latest style in its time, it confirms that Charles, who was instrumental in his father’s decision to commission Pugin, was at the forefront of contemporary taste even before he inherited the estate. 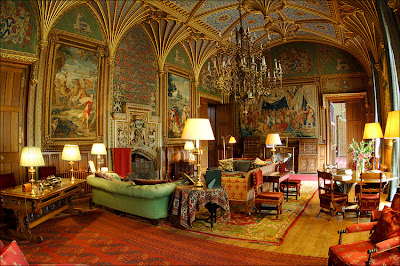 The Octagon Saloon, by contrast, was classical in design and originally decorated in cream and crimson silk, hung with classical prints and filled with Louis XVI furniture. It exhibited the top end of more conventional English good taste. The Chinese Bedroom, although quite different in style, also reflect the enduring English love of the Orient.
Developing out of an interest in classical antiquities collected in Mesopotamia and his love of the Mediterranean, Charles started buying 17th century Italian furniture, Flemish tapestries, medieval armour and 15th century art of Rennaisance. 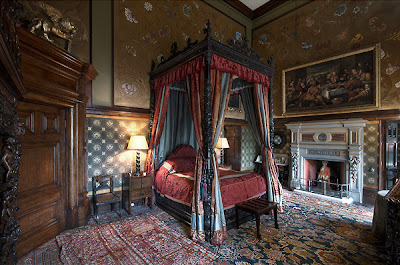 In the 1860s and 1870s the 3rd Earl Somers planted the arboretum, bringing back seed from all over the world. Of particular interest are the cedars, bu the areas of the surrounding hills were also planted with exotic trees to enhance the romanting setting. The 300 acre Deer Park runs up to the Malvern Hills and encloses a herd of red deer. Their proximity to the house is intended to enhance the impression of medieval authenticity and splendour at Eastnor. The lower part of the Park is used for caravan rallies nd other events, including the Big Chill Festival and adventure training.