Recent scholarship has raised doubts about whether or not abolitionist Olaudah Equiano, who was known in  his own lifetime as Gustavus Vassa, was born in Africa. While baptismal and naval documents indicate that he was born in South Carolina, it is argued here that his autobiographical account is nonetheless accurate, although allowing for reflection and information that was learned later in life. Information on facial markings (ichi) and other cultural features that are recounted in Vassa’s account indicate that he had first hand experience of his Igbo homeland and that he was about the age he thought he was at the time of his forced departure from the Bight of Biafra on a slave ship in 1754. 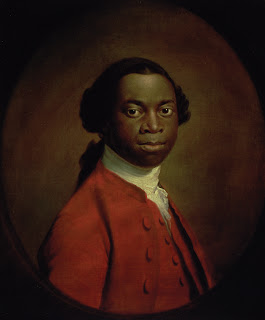 “My life and fortune have been extremely chequered, and my adventures various. Even those I have related are considerably abridged. If any incident in this little work should appear uninteresting and trifling to most readers, I can only say, as my excuse for mentioning it, that almost every event of my life made an impression on my mind, andinfluenced my conduct. I early accustomed myself to look at the hand of God in the minutest occurrence, and to learn from it a lesson of morality and religion; and in this light every circumstance I have related was to me of importance.
Olaudah Equiano otherwise known as Gustavus Vassa was the African slave who gained his freedom and became an activist for the abolition of slavery in the 18th Century. He wrote his celebrated Autobiography – ‘The Interesting Narrative of the life of Olaudah Equiano or Gustavus Vassa, the African 1789’ which is still available to buy to this day.

Officially, Olaudah Equiano was born c.1745 in the Eboe Lands of South Eastern Nigeria, his name translates to “when he speaks, others listen”. He was captured in c.1755, aged ten by neighbouring people and sold to English slave traders. At the age of 12 he was taken to the West Indies and within a few days, he had been transported to Virginia and sold to a local plantation owner.

After about a month he was sold on to a visiting British Naval Officer called Michael Henry Pascal, who brought him to London (after docking in Falmouth) in 1757: he then accompanied Pascal on many naval and military actions, notably those in the Seven Years War, and became a proficient able seaman. During this time Pascal renamed him ‘Gustavus Vassa’ after a 16th-century Swedish nobleman who successfully led the Swedes in a war of independence against the Danes to become the first Swedish King – an ironic, almost cruel renaming on behalf of Pascal. In between his voyages he spent his time in Westminster, London in the company of two sisters who had taken him under their wing and taught him how to read as well as sending him to school. He was baptised in 1759, with his new name of ‘Gustavus Vassa’ at St. Margaret’s Church, St. Margaret Street, Westminster, London.
Recent research has shown that it is from these Baptism records in London as well as records of naval muster rolls that Equiano may in fact have been born in Carolina, USA. This evidence has questioned whether he was ever captured in Nigeria as a young boy and enslaved as he states in his book. Historians have never discredited the accuracy of Equiano’s narrative, nor the power it had to support the abolitionist cause so successfully, particularly in Britain during the 1790’s. However, parts of Equiano’s account of the Middle Passage may have been based on already published accounts or the experiences of those he knew around him. It’s possible that at one time he may have found it in his self-interest to lie about his real birthplace but it could also have simply been a case of language barriers. The debate still wrangles on…but the outcome of his efforts to help end the slave trade will never be forgotten.

After the end of the Seven Years War, in 1762, Pascal fell back on his promise to free Equiano and sold him onto slavery in the West Indies. During this time, Equiano continued travelling on board ships as a slave between North America, the West Indies and the Mediterranean. He was then acquired for the sum of £40 by Robert King, a Quaker Merchant from Philadelphia who traded in the Caribbean. In 1765, King promised Equiano his freedom if he could amass the £40 he had initially paid for him thinking this would be a virtually impossible task. During his enslavement, King allowed him to trade for himself on the side and in due course Equiano managed to amass the £40 required to buy his own freedom. Unlike Henry Pascal, King did not fall back on his promise and in 1766 at Monserrat in the Caribbean Islands of Leeward, at the tender age of 21, Equiano was finally a free man. He was asked to continue to work on board ship as an able-bodied seaman and continued travelling on board ships around North America and the West Indies. After a shipwreck in the Bahamas he purchased his passage to England where he became a hairdresser in London c.1767.

As a free man Equiano often returned to the sea to trade and during this time, took part in voyages to the West Indies and the Mediterranean. In 1773, he joined a voyage of exploration under the command of John Phipps to try to find a northwest passage to India across the North Pole (an extraordinary venture in the 18th century). Interestingly, a young Horatio Nelson was also present onboard ship for this exploratory trip. Equiano converted to Methodism in about 1774. The next year, he helped set up a plantation in Central America, where he acted as the buyer and overseer of the black slaves. By 1777 he had resigned from this job and returned to London where he became involved in a plan to resettle poor blacks in Sierra Leone.

His attempt to work for the Sierra Leone resettlement scheme (for London’s destitute blacks) was short-lived since he was sacked for standing up for black rights in 1777. He started his anti-slavery activities around this time – first trying to free the black sea-cook, John Annis. From 1787, he devoted himself to the anti-slavery cause, going on lengthy speaking tours in order to win over public opinion. His personal account, ‘The Interesting Narrative of the Life of Olaudah Equiano, or Gustavus Vassa, the African’, published in 1789, was a “uniquely detailed account of an African’s movement out of slavery”. It was the most important single literary contribution to the campaign for the abolition of slavery and one of the earliest books published by a black African writer.

For the first time the case for abolition, presented by a black writer in a popular form, reached a wide reading public and was immediately popular. It was, for instance, the last book read by John Wesley before his death. And it was highly effective in rousing public opinion. “We entertain no doubt of the general authenticity of this very intelligent African’s interesting story. The narrative wears an honest face … [and] seems calculated to increase the odium [hostility] that hath been excited against the West-India planters,” wrote the ‘Monthly Review’. The book established Equiano as a chief spokesman for Britain’s blacks.
When his book was published he was living in a house on what was then 10 Union Street, West Marylebone, London which is now 73 Riding House Street, Westminster, London. His former residence is now marked by a green commemorative plaque courtesy of The City Of Westminster which was officially unveiled on 11th October 2000 as part of London’s Annual Black History Month celebrations.
Quite how such an eminent member of London’s abolition movement came to reside in the fenland village of Soham remains a mystery, perhaps by a chance meeting in nearby Cambridge during one of his many book tours. On 7th April 1792, Gustavus Vassa – An African (Bachelor of St. Martin in the Fields) married Susannah Cullen (Spinster of the Parish of Soham) at St. Andrew’s Church, Soham Cambridgeshire. The marriage was by special licence and witnessed by Francis Bland and Thomas Cullen. Previous accounts of this marriage have recorded the bride as coming from either Ely or Fordham, whereas the actual record shows Susannah as ‘Spinster of the Parish of Soham’. Unfortunately, as there is no record of her birth or baptism in the Parish, it is likely that she came to Soham with her parents as an infant, probably from the nearby village of Fordham (Cullen or Collen being a local name).

One of Equiano’s last London addresses appears to have been Plaisters Hall in the City of London from where he drew up his will on 28th May 1796 after the death of his wife. He then moved to John Street, Tottenham Court Road, London which is close to Whitefield’s Methodist Chapel (where there is a small, recent memorial). The following year, in 1797, Equiano died at the age of 52. His death was recorded in Paddington Street, Middlesex, London on 31st March 1797 but the whereabouts of his burial is still unknown. Sadly, his eldest daughter Anna Maria Vassa, died just a few months later on 21st July 1797 aged just four years and is buried at St. Andrew’s Church, Chesterton, Cambridge where there is a commemorative plaque in her memory.

The surviving daughter, Joanna Vassa, inherited a sizable estate from the wealth her father had accumulated from the sale of his book, equivalent to around £100,000 in today’s money. She went on to marry The Reverend Henry Bromley and they ran a Congregational Chapel at Clavering near Saffron Walden in Essex, before moving to London in 1845. Joanna died on 10th March 1857 at the age of 61 and was buried at Abney Park Cemetery in Stoke Newington on 16th March 1857, her husband Henry survived her for 20 years and was eventually buried alongside her on 12th February 1878. It’s not yet known whether they had any children.

The Slave Trade was finally abolished in England, 10 years after the death of Olaudah Equiano, in 1807. ‘The Slave Trade Act’ was passed as an Act of Parliament on 25th March 1807 the long title of which is “An Act for the Abolition of the Slave Trade”. The original act is still held among the collections of the Parliamentary Archives.

The act abolished the slave trade in the British Empire, but not slavery itself; that had to wait for the ‘Slavery Abolition Act’ of 1833. The trade had begun in 1562, during the reign of Elizabeth I, when John Hawkins led the first slaving expedition.