Montezuma II, the 9th huey tlatoani (great speaker) of the Aztecs of Mexico, came to power in 1502 at the time of both triumph and danger for the Aztec realm. The empire was larger then ever, and Montezuma himself was one of the most powerful and intriguing figures in its history. He changed the previous meritocratic system of social hierarchy and widened the divide between pipiltin (nobles) and  macehualtin (commoners) by prohibiting commoners from working in the royal palaces. 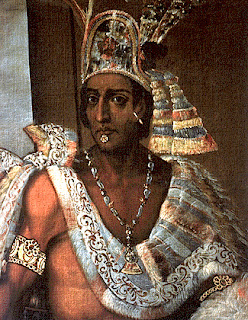 Montezuma II
According to the astonished Spaniards who observed his lifestyle, thousands of servants, all nobles, provided vast meals on the gold plates; he wore new clothes every day; was entertained by dwarfs, freaks and his own zoo; and it was said that 150 of his wives were pregnant at the same time. More historically proved, he had eight daughters, including Doña, and Isabel Montezuma, and eleven sons, among them Chimalpopoca and Tlaltecatzin.
But this magnificence was brought to the violent end in 1521, when the Aztec capital was destroyed by the famous Spanish conquistadors, led by Hernan Cortés. If we believe 16th-century sources, Montezuma played an inglorious role in the defeat of his people. Instead of mobilising his forces against the heavily-outnumbered inviders, the tloatoani was paralysed with fear as the conquistadors approached, terrified by series of omens, and believing Cortés to be the reincarnation of the great god Quetzalcoatl. When Cortés arrived at the city, Montezuma welcomed him and subnitted to Spanish rule. Cortés seized him and forced him to act as a puppet ruler until his eventual death, eather at the hands of the Spanish or his own disgruntled subjects. 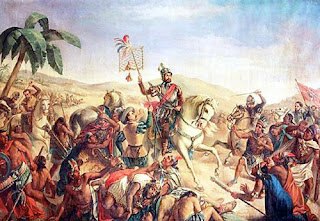 Through the centuries Montezuma was presented as “timorous and cowardly” ruler, while Cortés was “noble, valiant hero”. This juxtaposition of hero and villain has been recently challenged, and if we judged Montezuma’s actions in the light of indigenous expectations rather than by the standards of history, then he appears in a different light. The reality is that Montezuma was a victim of both the Spanish tendency to romanticise their victory and the Aztec’s wish to excuse their defeat.
The Spanish focus on Montezuma’s role in the conquest, where welcoming speach was transformed into surrender, gifts given to Spaniards as a demonstration of wealth and power became a bribe, has also suited indigenous historians. As a nation of proud wariors, it was difficult for the Aztesc to accept the ignominy of defeat and they looked for an explanation for their downfall. The vacillations of a weak and credulous ruler were the perfect excuse.
But there is no real evidence to support claims that portents of doom were recognised prior to the conquest, or that Montezuma was paralysed by fear of Spanish advance. Omens were part os Mesoamerican ideology and it suited Aztecs to believe that their defeat was preordained, absolving them of guilt, and encouraging the myth of Montezuma’s psychological collapse in the face of his impending downfall. 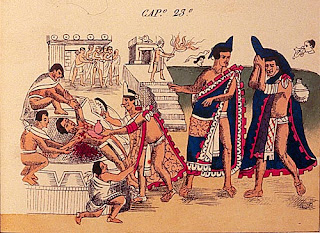 Aztec’s human sacrifice
In his Historia, Bernal Diaz del Castillo states that on July 1, 1520, the Spanish forced Moctezuma to appear on the balcony of his palace, appealing to his countrymen to retreat. The people were appalled by their emperor’s complicity and pelted him with rocks and darts. He died a short time after that. Cortés similarly reported that Moctezuma died was stabbed by his countrymen. On the other hand, the indigenous accounts claim that Moctezuma was killed by the Spanish prior to their leaving the city. Some modern scholars, such as Matthew Restall (2003), prefer the indigenous accounts over the Spanish ones. They surmise that the Spanish killed Moctezuma once his inability to pacify the Aztec people had made him useless.
Despite his subsequent criticism by Spanish and Aztec historians, Montezuma was no coward. In fact, he was one of the most successful and belligerent rulers in Aztec history. He was not a passive and cowardly victim of the conquistadors, but he has certainly been a victim of history, an unfortunate ruler whose defeat has tainted him irretrievably as traitor, collaborator, and scapegoat. 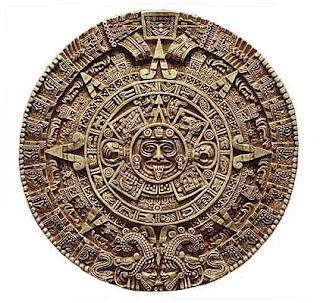