In September 1867, Colonel Thomas Kelly and Captain Timothy Deasy were arrested in the centre of Manchester on suspicion of terrorism. News of their arrest was immediately sent to Mr. Disraeli, the Prime Minister, as Colonel Kelly was the most prominent Fenian of them all, having only recently been confirmed as Chief Executive of the Irish Republican Brotherhood and as such was considered quite a capture. A few days later the both prisoners were conveyed from the Court House in Manchester to the County Jail on Hyde Road, West Gorton. They were handcuffed and locked in two separate compartments inside the Police van, there was a posse of 12 policemen to escort them. 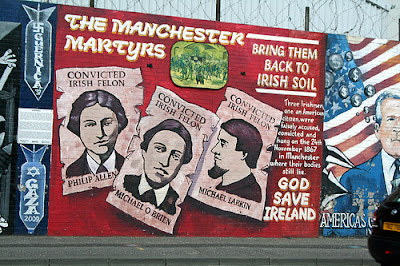 On the way, a man was show up into the middle of the road, pointed a pistol at the driver and called on him to stop. At the same time, a party of about thirty men surrounded the van and seized the horses, one of which they shot. The police being unharmed offered little resistance, and were soon put to flight. Sergeant Charles Brett, who was at the back of the van with prisoners, refused to open the door, so one of the rescuers placed his revolver at the keyhole of the van and fired, at that moment Sergeant Brett had put his eye to the keyhole to see what was going on outside, the bullet passed through his eye and killed him immediately. The door was opened from the inside and Colonel Kelly and Captain Deasy escaped, never to be recaptured (despite a reward of £300  or £19,000 as of 2011). 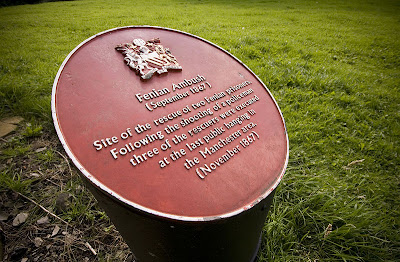 Other casualties were a police officer shot in the thigh, and a civilian shot in the foot.  The police organize the chase, and 29 people were  arrested, including, they claimed, the three men who had fired the revolvers. By November, five of the men arrested for taking part in the rescue. The case against William O’Mera Allen, Michael Larkin; William Gould alias O’Brien, Thomas Maguire and Edward Stone was heard first. 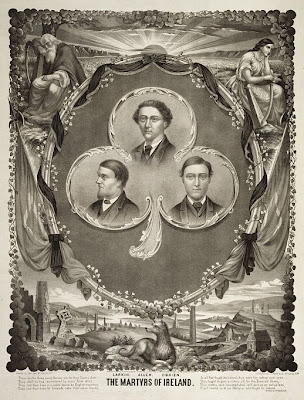 Allen was a 19-year-old carpenter; Larkin was a tailor, the only married member of the group, and had four children. O’Brien, who had fought in the American Civil War, was a 30-year-old shop assistant from County Cork. O’Meagher Condon, born in Cork and 32-years-old, had also fought for the Union side in the American Civil War. Thomas Maguire was a Royal Marine who had served for 10 years and had just returned home on leave. It was argued that the case should not be heard in Manchester or anywhere in Lancashire. That was rejected and the trial proceeded. 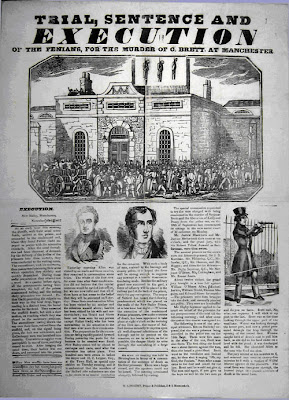 At times it was very fractious, the details of which can be read elsewhere. This trail concluded on Friday November 1st 1867. The others were tried in small batches before different juries although the legal teams and many of the witnesses were same in all the trials. After the verdict each of the five were asked if they had anything to say why sentence should not be passed against him. Allen stated that he was not William O’Meara  (O’Mara in the prison register) Allen, but William Phillip Allen of Omara, County Cork.
All  5 men were convicted and sentenced to death. Maguire was soon after pardoned and discharged, Stone’s sentence was commuted on the eve before the day fixed for his execution. Larkin, Allen and O’Brien were publicly hanged on the 23rd of November, 1867. Most accounts claim that Allen died almost instantly from a broken neck, but Larkin and O’Brien were not so fortunate. Father Gadd, reported that:

„The other two ropes, stretched taut and tense by their breathing twitching burdens, were in ominous and distracting movement. The hangman had bungled! … Calcraft then descended into the pit and there finished what he could not accomplish from above. He killed Larkin.“

There has been speculation as to what happened to the remains of the Manchester Martyrs and the other prisoners executed at Manchester.
What the register does not make clear is that all the men who were sentenced to 5 years had actually been cleared of the murder charges. They were charged with the misdemeanours of assaulting police officers in the execution of their duty and riot. They received the maximum possible sentences. 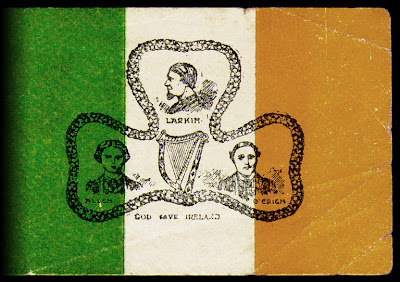 Their execution produced a great wave of sympathy for the „Manchester Martyrs“. The alleged last words of the executed men, „God Save Ireland“, were later made into a song by T. D. Sullivan. Charles Brett was the first Manchester City Police officer  to be killed on duty, and he is memorialised in a monument in St Ann’s Church. Allen, Larkin, and O’Brien are also memorialised, both in Manchester – where the Irish community made up more than 10 percent of the population – and in Ireland, where they were regarded by many as inspirational heroes.

Book review: Europe: The Struggle for Supremacy, 1453 to the Present by Brendan Simms