Magna Carta (Latin for “Great Charter”) is one of the most celebrated documents in English history. At the time it was the solution to a political crisis in Medieval England but its importance has endured as it has become recognised as a cornerstone of liberty influencing much of the civilized world.

In 1213 King John gave England to the Pope as a fiefdom. The barons and the English Church were outraged and they came together under the leadership of Stephen Langton, Archbishop of Canterbury. They acknowledged the laws of Henry I and in 1215 produced the Articles of the Barons and eventually the Magna Carta. 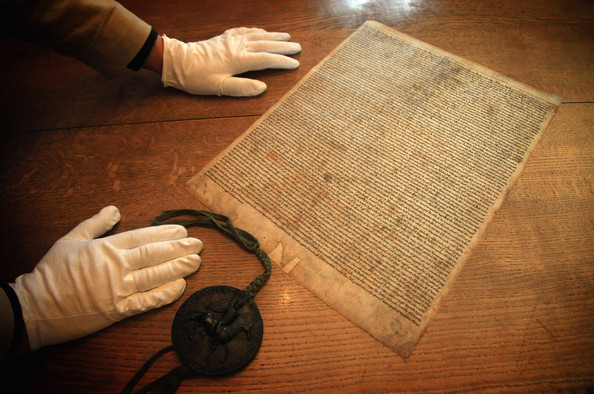 They aimed to protect the monarchy and nobility from any one king. The boldest of the barons and churchmen met at Runnymede, they had prepared a short document, which would become known as the Article of the Barons. They called on the king to attend. John arrived with the Papal legate, the Archbishop of Canterbury and several bishops and agreed to the terms set down.

The Charter establishes the rights of the whole landed class, it establishes a law which is above the king and which even he must not break.
The Charter did not solve the problems of the day. The barons were at war with each other and at war with the King.
There are four original drafts of the Magna Carta, the very parchment that was at Runnymede. Two are in the British Museum, one in Salisbury Cathedral and one in Lincoln Cathedral.
Magna Carta contains 63 clauses written in Latin on parchment. Only three of the original clauses in Magna Carta are still law today. One defends the freedom and rights of the English Church, another confirms the liberties and customs of London and other towns, but the third is the most famous:
No free man shall be seized or imprisoned, or stripped of his rights or possessions, or
outlawed or exiled. Nor will we proceed with force against him except by the lawful
judgement of his equals or by the law of the land. To no one will we sell, to no one deny or
delay right or justice.

Some of the 49 Articles in the Caron’s Chapter

Article one
After the death of their predecessors, heirs who are of full age shall have their inheritance on payment of the old relief, which is to be stated in the charter.
Article six
The king shall not grant any baron the right to take an aid from his free men, except for ransoming his person, for making his eldest son a knight and for once marrying his eldest daughter, and this he shall do by a reasonable aid.
Article twelve
That the measure for wine, corn and widths of cloth and other things to be improved; and so with weights. Article fourteen
That no sheriff shall concern himself with pleas pertaining to the crown without coroners; and that counties and hundreds be at the old rents without any additional payment, except the king’s demesne manors.
Article twenty-one
That neither the king nor his bailiff shall take another man’s timber for castles or other works of his, except with the agreement of him whose timber it is.
Article thirty four
If anyone who has borrowed from the Jews any sum, great or small, dies before it is repaid, the debt shall not bear interest as long as the heir is under age, of whomsoever he holds; and if the debt falls into the hand of the king, the king shall not taken anything except the principal which is mentioned in the bond.
Article thirty nine
No free man shall be arrested or imprisoned or outlawed or exiled or victimised in any other way, neither will we attack him or send anyone to attack him, except by the lawful judgement of his peers or by the law of the land.
Article forty one
And that the king remove foreign knights, mercenaries, cross-bowmen, routiers and sergeants, who come with horses and arms to the detriment of the kingdom. Article forty two That the king make justices, constables, sheriffs and bailiffs of such as know the law of the land and means to observe it well.
Article forty-nine
This is the form of security for the observance of the peace and liberties between the king and the kingdom.

Clan tartans are not an ancient Scottish tradition