James Cleveland Owens was born in Oakville, Alabama, on September 12, 1913, the son of a sharecropper, a farmer who rents land. He was a sickly child, often too frail to help his father and brothers in the fields. The family moved to Cleveland, Ohio, in 1921, for better work opportunities. There was little improvement in their life, but the move did enable young Owens to enter public school, where a teacher accidentally wrote down his name as “Jesse” instead of J. C. He carried the name with him for the rest of his life.

When Owens was in the fifth grade, the athletic supervisor asked him to join the track team. From a skinny boy he developed into a strong runner, and in junior high school he set a record for the 100-yard dash. In high school in 1933 he won the 100-yard dash, the 200-yard dash, and the broad jump in the National Interscholastic Championships. Owens was such a complete athlete, a coach said he seemed to float over the ground when he ran.

A number of universities actively recruited Owens, but he felt that college was only a dream. He felt he could not leave his struggling family and young wife when a paycheck needed to be earned. Owens finally agreed to enter Ohio State University in Columbus, Ohio, after officials found employment for his father. In addition to his studies and participation in track, Owens worked three jobs to pay his tuition. He experienced racism (the idea that one race is superior to others) while a student at Ohio State, but the incidents merely strengthened his desire to succeed. At the Big Ten Conference track and field championships at the University of Michigan in 1935, he broke three world records and tied another. His 26 foot 8 1/4-inch broad jump set a record that was not broken for twenty-five years.

Owens was a member of the 1936 U.S. Olympic team competing in Berlin, Germany. The African American members of the squad faced the challenges not only of competition but also of Adolph Hitler’s (1889–1945) boasts of Aryan supremacy, or the domination of Hitler’s ideal white, European athletes. On the first day, Hitler shook hands only with the German victors and then left the stadium. Olympic committee officials insisted Hitler greet every medalist or none at all. Hitler opted for the latter and skipped all further medal presentations. Owens won a total of four gold medals at the Olympic games. As a stunned Hitler angrily left the stadium, German athletes embraced Owens and the spectators chanted his name.

Owens surprised many by winning four gold medals: On August 3, 1936 he won the 100m sprint, defeating Ralph Metcalfe; on August 4, the long jump (later crediting friendly and helpful advice from Lutz Long, the German competitor he ultimately defeated); on August 5, the 200m sprint; and, after he was added to the 4 x 100 m relay team, he won his fourth on August 9 (a performance not equaled until Carl Lewis won gold medals in the same events at the 1984 Summer Olympics).
He persuaded Owens to use Adidas shoes, the first sponsorship for a male African-American athlete. Speaking to Long’s son, , Owens said in 1964 that Long went to him and told him to try and jump from a spot several inches behind the take-off board.The story of Long’s advice to Owens has been challenged by Olympic historian Tom Ecker, who had studied the footage of the games. He stated that in 1965, after researching the evidence, he had confronted Owens, who admitted he had made up the story to please Long’s son and that he had not met Long until the competition was over, when they quickly became friends. In his last letter to Owens before his death Long had asked him to speak to his son, writing, “Someday find my son … tell him about how things can be between men on this Earth.” 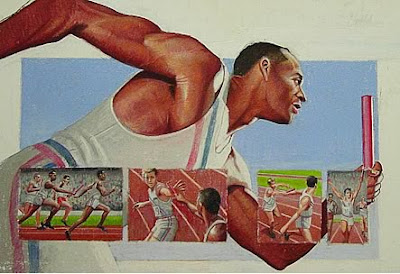 Just before the competitions, Owens was visited in the Olympic village by Adi Dassler, the founder of the Adidas athletic shoe company.
Owens was allowed to travel with and stay in the same hotels as whites, while at the time blacks in many parts of the United States were denied equal rights. After a New York City ticker-tape parade of Fifth Avenue in his honor, Owens had to ride the freight elevator at the Waldorf-Astoria to reach the reception honoring him.Within months he was unable to find work to finance his senior year of college. Owens took a job as a playground supervisor, but was soon approached by promoters who wanted him to race against horses and cars. With the money from these exhibitions, he was able to finish school. Jesse Owens was never invited to the White House nor were honors bestowed upon him by president Franklin D. Roosevelt (FDR) or his successor Harry S. Truman during their terms.

In 1937 Owens lent his name to a chain of cleaning shops. They prospered until 1939, when the partners fled, leaving Owens with a bankrupt business and heavy debts. He found employment with the Office of Civilian Defense in Philadelphia(1940–1942) as national director of physical education for African Americans. From 1942 to 1946 he was director of minority employment at Ford Motor Company in Detroit, Michigan. He later became a sales executive for a Chicago sporting goods company. Ambassador of sport
In 1951 Owens accompanied the Harlem Globetrotters basketball team to Berlin at the invitation of the U.S. High Commission and the army. He was appointed secretary of the Illinois Athletic Commission (1952–1955), and was sent on a global goodwill tour as ambassador of sport for the United States. Also in 1955, he was appointed to the Illinois Youth Commission. In 1956 he organized the Junior Olympic Games for youngsters in Chicago between the ages of twelve and seventeen. Owens and his friend, boxer Joe Louis(1914–1981), were active in helping African American youth.

Owens headed his own public relations firm in Chicago, Illinois, and for several years had a jazz program on Chicago radio. He traveled throughout the United States and overseas, lecturing youth groups. Not especially involved in the civil rights movement, which pushed for equal rights among all races, Owens admired civil rights leader Martin Luther King Jr. (1929–1968). Owens and his childhood sweetheart, whom he had married in 1931, had three daughters.

However, Owens refused to support the black power salute by African-American sprinters Tommie Smith and John Carlos at the 1968 Summer Olympics. He told them,

“The black fist is a meaningless symbol. When you open it, you have nothing but fingers – weak, empty fingers. The only time the black fist has significance is when there’s money inside. There’s where the power lies.”

Forty years after Owens won his gold medals, he was invited to the White House to accept a Medal of Freedom from President Gerald Ford (1913–). The following year, the Jesse Owens International Trophy for amateur athletes was established. In 1979 President Jimmy Carter (1924–) honored Owens with a Living Legend Award.
In the 1970s Owens moved his business from Chicago to Phoenix, Arizona, but as time progressed, his health deteriorated. He died of cancer on March 31, 1980, after a lengthy stay in a Phoenix hospital. He was buried in Chicago several days later.

The highest honor Owens received came a full ten years after his death. Congressman Louis Stokes from Cleveland pushed tirelessly to earn Owens a Congressional Gold Medal. President George Bush (1924–) finally gave the award to Owens’s widow in 1990. During the ceremony, President Bush called Owens “an Olympic hero and an American hero every day of his life.” Owens’s fabled career as a runner again caught public attention in the 1996 Olympic Games—the sixtieth anniversary of his Berlin triumph—as entrepreneurs (risk-taking businessmen) hawked everything from Jesse Owens gambling chips to commemorative (having to do with honoring someone or something) oak tree seedlings similar to the one Owens was awarded as a gold medallist in Berlin.

Racism at home had denied Owens the financial fruits of his victory after the 1936 games, but his triumph in what has been called the most important sports story of the century continued to be an inspiration for modern day Olympians like track stars Michael Johnson (1967–) and Carl Lewis (1961–). In Jet magazine (August 1996), Johnson credited Owens for paving the way for his and other black athletes’ victories.

King Charles’ II Flight after the Battle of Worcester