Hernán Cortés or Cortez, Hernando (1485-1547), Spanish explorer and conqueror of the Aztec Empire of Mexico, was born in Medellín, Extremadura. He studied law at the University of Salamanca but cut short his university career in 1501 and decided to try his fortune in the Americas. Cortés sailed for Santo Domingo (now the Dominican Republic) in the spring of 1504. In 1511 he joined Spanish soldier and administrator Diego Velázquez in the conquest of Cuba and subsequently became alcalde (mayor) of Santiago de Cuba. In 1518 Cortés persuaded Velázquez, who had become governor of Cuba, to give him the command of an expedition to Mexico. The mainland had been discovered the year before by Spanish soldier and explorer Francisco Fernández de Córdoba and subsequently by Juan de Grijalva, nephew of Velázquez. 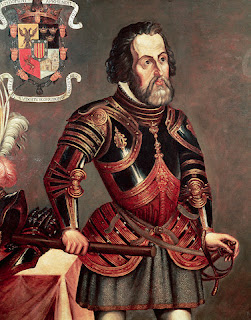 On February 19, 1519, Cortés, with a force of some 600 men, fewer than 20 horses, and 10 field pieces, set sail from Cuba. He left despite the cancellation of his commission by Velázquez, who had become suspicious that Cortés, once in a position to establish himself independently, would refuse to recognize his authority. Cortés sailed along the coast of Yucatán and in March 1519 landed in Mexico, subjugating the town of Tabasco. From the native inhabitants of Tabasco, Cortés learned of the Aztec Empire and its ruler, Montezuma II.

Cortés took numerous captives, one of whom, Malinche (baptized Marina), became his mistress; out of loyalty to him she acted as the interpreter, guide, and counselor for the Spaniards. Finding a better harbor a little north of San Juan, the Spaniards moved there and established a town, La Villa Rica de la Vera Cruz (now Veracruz). Cortés organized an independent government, and renouncing the authority of Velázquez, acknowledged only the supreme authority of the Spanish crown. In order to prevent those of his small force who opposed this movement from deserting him and carrying the news to Cuba, Cortés destroyed his fleet.

After negotiations with Montezuma, who tried to persuade Cortés not to enter the Aztec capital city of Tenochtitlán, Cortés started his famous march inland. He overcame the native Tlaxcalans and then formed an alliance with them against the Aztecs, their enemies. From that time until the conquest was achieved, the Tlaxcalans continued to be the most important of all the native allies of the Spaniards.

Montezuma pursued an irresolute policy during Cortés’s march, and finally determined not to oppose the Spanish invaders but to await their arrival at the Aztec capital and to learn more about their purposes. On November 8, 1519, Cortés and his small force, with some 600 native allies, entered the city and established headquarters in one of its large communal dwellings. Some accounts say that the Aztecs may have believed Cortés was Quetzalcoatl, a legendary god-king who was light-skinned and bearded and, according to a prophecy, was expected to return from the east. The Spanish soldiers were allowed to roam through the city at their pleasure and found much gold and other treasures in the storehouses. Despite the amicable reception given the Spaniards, Cortés had reason to believe that attempts would be made to drive him out. To safeguard his position, he seized Montezuma as hostage and forced him to swear allegiance to Charles I, king of Spain, and to provide a ransom of an enormous sum in gold and jewels. Meanwhile Velázquez dispatched an expedition under the Spanish soldier Pánfilo de Narváez to Mexico. In April 1520, Cortés received word that Narváez had arrived on the coast. Leaving 200 men at Tenochtitlán under the command of Pedro de Alvarado, an explorer who had also been with Grijalva, Cortés marched with a small force to the coast, entered the Spanish camp at night, captured Narváez, and induced the majority of the Spaniards to join his force. 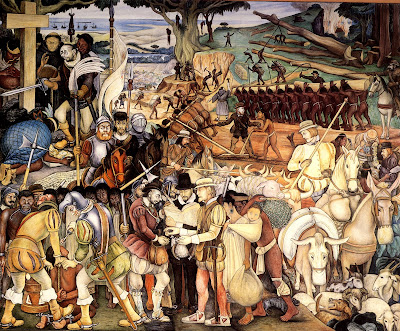 Meanwhile harsh rules by Alvarado had aroused the Aztecs in the capital. An Aztec revolt against the Spaniards and their own imprisoned ruler, Montezuma, was under way when Cortés returned to the city. He was allowed to enter with his followers and to join Alvarado, but thereupon was immediately surrounded and attacked. At Cortés’s request, Montezuma addressed the Aztecs in an attempt to quell the revolt. The Aztec ruler was stoned, and he died three days later. The Spanish and their allies were driven out of the city by a group of Aztecs on a dark, rainy night, the famous Noche Triste (“Sad Night”), June 30, 1520. The Aztecs pursued the retreating Spanish troops. On July 7, 1520, after defeating a very large force of Aztecs, Cortés finally reached Tlaxcala. There, during the summer, he reorganized his army with the aid of some reinforcements and equipment from Vera Cruz. Cortés then began his return to the capital, capturing outlying Aztec outposts on the way. On August 13, 1521, after a desperate siege of three months, Cuauhtémoc, the new emperor, was captured, and Tenochtitlán fell.

Cortés built Mexico City on the ruins of Tenochtitlán. Colonists were brought over from Spain, and the city became the principal European city in America. Cortés consolidated control over Mexico, inflicting great cruelty on the indigenous peoples. The popularity that Cortés achieved in Spain because of his conquests and the riches he had sent resulted in his being named governor and captain general of New Spain in 1523. Cortés then undertook an expedition to Honduras from 1524 to 1526. Meanwhile, fearing his ambition, the Spanish court had sent officials to Mexico to investigate his acts. In 1528 Cortés was ordered to relinquish the government of Mexico and return to Spain. There he appealed to the king, was made marquis of the Valley of Oaxaca in southern Mexico, and was reappointed captain general. He was not restored, however, to the civil governorship of Mexico. Cortés married the daughter of the count of Aguilar and in 1530 returned to Mexico. There he found himself constantly checked in his activity, his property kept from him, his rights interfered with, and his popularity waning.

In 1536 Cortés discovered the peninsula of Baja California in northwest Mexico, and explored the Pacific coast of Mexico. In 1539 the Spanish explorer Francisco Vásquez de Coronado secured the right to seek the Seven Cities of Cíbola, and in disgust Cortés went back to Spain to complain to the court. Again he was received with honor but could secure no substantial assistance toward recovering his rights or his property. He served as a volunteer in 1541 in the unsuccessful Spanish expedition against Algiers, lost a large part of his remaining fortune, and was shipwrecked. Cortés, neglected by the court after the Algiers expedition, retired to a small estate near Seville, where he lived until his death.

further reading on this blog

Friedrich Engels, The Father of Socialism