King John’s surrender of his realm in 1213 was symbolised by his agreement to pay an annual tribute to the pope of 1,000 marks (666 pounds). This tribute was paid, albeit irregularly, into the 1290s. However, king Edward I and Edward II, John’s grandson and great-grandson, found themselves increasingly at odds with the papacy, partly over their rights to collect their own taxes from the English church and also over the pope’s partisan support for the king’s of France. As a result, no tribute was paid in the 30 years before 1330. The last payment ever recorded was a token 1,000 pounds from Edward III in 1333, in expectation of papal favours. 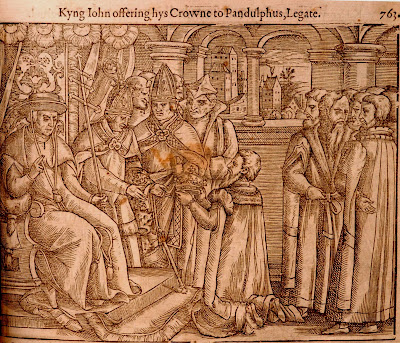 Thereafter, although papal request were regularly transmitted for settlement, no money was forthcoming. In 1365 parliament debated the last papal request and concludedat John’s original surrender of had been invalid since it had lacked the assent of the bishops. This marked the formal end to English recognition of the pope’s sovereignty. However two further facts need to be borne in mind. Since Anglo-Saxon times, a levy known as Peter’s Pence had been paid by England to Rome, described as ‘census’ and implying subjection to the papacy, albeit collected from the English church rather than from the king.

This ‘census’ was still being paid as late as 1534, on the very eve of Henry VIII’s final breach with Rome. Secondly, before John’s actions of 1213, there were rumours, in England as well as Rome, suggesting that John’s father, King Henry II, had already acknowledged the pope not merely as his feudal overlord. The papacy itself has never formally resigned its claim to tribute, census over overlordship.

As a result – and factoring in inflation and compound interest – the amount of money owed in tribute from 1300 onwards would represent a sum that entirely dwarfs the national debt of the other liabilities of the English crown, were the pope, perhaps on his next visit to England, to obtain full settlement of arrears,