Many must have predicted a bleak future for England when the 22 year old princess Elizabeth succeeded her half sister Mary Tudor to the throne. The government was a disarray, and the treasury was empty. The circumstances of Elizabeth’s birth to Henry VIII and Anne Boleyn had placed her in the centre of controversy between Catholics and protestants who threatened at any moment to take up arms in the defense of their beliefs.

Elizabeth I (r.1558 – 1603)
Much of the credit for England’s success during the last half of the century must go directly to her queen. Elizabeth I  was a handsome woman with a humanist education, a quick mind, and a strong will. Her approach to politics was decidedly Machiavellian. Although she ruled with a firm hand, she was known as Good Queen Bess to her subjects. Elizabeth never married. Her failure to provide an heir posed a serious threat for an England only two generations removed from civil war. On the other hand, her maidenhood was a valuable asset in diplomacy. What England could not gain by force or persuasion it often gained from men who sought Elizabeth’s hand and her dowry of the English realm. 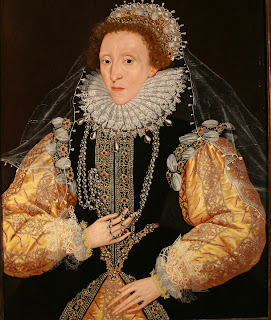 Queen Elizabeth I of England

Interesting contrast can be drawn between the government of the strong-willed monarch of England and Spain. Like Philip, Elizabeth maintained a firm hold on every facet of government and relied on her own instincts to arrive at crucial decisions, While both maintained glittering courts to impress their subjects and foreign dignitaries, neither succumbed to the empty vanities of courtly life. On the other hand, Elizabeth displayed several virtues that Philip lacked. She had the ability to choose shrewd and loyal advisers and the wisdom to place upon them the heavy responsibilities of administration. Of these advisers the most important were William Cecil, later Lord Burghley, who served for her forty years, and the younger Francis Walsingham. Finally, in the age of religious fanatics, Elizabeth was a political realist more concerned with order, obedience, and power than with orthodoxy.
The English Parliament
The Parliament, a legislative body representing the interests of the landed gentry, posed a unique problem for the queen. She was determined to control the government without directly challenging the prerogatives of her most powerful subjects. She closely supervised Parliament and directed its work toward goals she desired, thus maintaining a working relationship without sacrificing her power. The conciliatory religious settlement that allowed the great majority of Englishmen to remain loyal subjects without violating their religious scruples is a good example of both Elizabeth’s wisdom and ability to enforce her will on the Parliament. In 44 years of her reign the Parliament was summoned only 13 times. 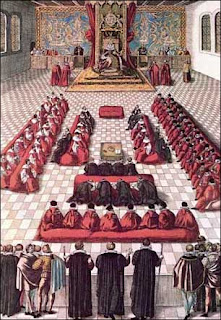 Queen Elizabeth I in Parliament
Mary, Queen of Scots
Mary spent the last nineteen years of her life in English exile. She was an unwelcome guest there, for she posed a serious threat to Elizabeth. As the great-granddaughter of Henry VII, she was next in line of succession to the English throne. In fact among Catholics, who regarded Elizabeth as an illegitimate child, Mary had a prior claim to the crown. During the two decades of semicaptivity, she became the center of conspiracies supported by Philip II, who sought to place her on the throne. Despite warnings from her advisers, Elizabeth was reluctant to act against her Scottish cousin until the revelation of Babington’s plot (1586), a conspiracy to assassinate Elizabeth and place Mary to the throne. As a result, Mary, Queen of Scots, fell beneath the executioner’s blade (1587). 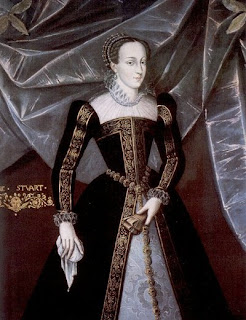 Mary, Queen of Scots
Defeat of the Spanish Armada
After 1559 Spain replaced France as the main threat to English security. The relations between England and Spain deteriorated over three issues: their religious differences, England’s support of the Dutch rebellion, and the armed incursion of English mariners into the Spanish empire. The wealth of Spain’s empire lured adventurers who ran high risk in the hope of great returns. Elizabeth unofficially supported these Sea Dogs while avoiding an open conflict with Spain. The incursions beginning  in 1562, when John Hawkins illegally traded African slaves to Spanish colonists. His ventures were lucrative until 1568 when a Spanish squadron practically destroyed his small fleet in the harbour of Vera Cruz. The Sea Dogs continued their depredations, and Mary, Queen of Scots, had been executed. In the attempt to end his frustrations with one decisive stroke, Philip assembled an armada of 130 ships and thirty thousand men, most of whom were infantry troops. The plan called for the fleet to rendezvous with Parma’s army in the Netherlands and to invade England. The enterprise was doomed from the start. A running fight up the English Channel demonstrated that the large, slow Spanish ships were no match for the English, who boasted a superiority in maneuverability and firepower. The destruction begun by the English was finished by high winds and heavy seas. 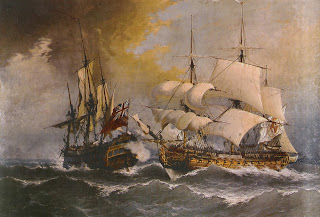 English vs Spanish Armada
The End of the Great Reign
If Elizabeth had a weakness, it was her partiality for unworthy but handsome young male favourites such as Robert Dudley, earl of Leicester, and Robert Devereux, Earl of Essex, provoking much scandalous speculation. Sir Walter Raleigh was another but more worthy favourite who lost the queen’s regard after he had the temerity to marry one of her maids of honour without seeking her permission. Elizabeth’s health was generally good throughout her life. In January 1603 she was suffering  from the cold when she moved from  Whitehall to Richmond Palace. She recovered, but became very ill again on 18 March, but refused to go to bed, lying instead on a heap of cushions piled on the floor. In the last flash of her great spirit, when told by Cecil that she must go to bed, she replied, “Little man, little man, ‘must’ is not a word to use to princes”. Elizabet died at three o’clock in the morning on 24 March 1603. She was buried in Westminster Abbey in the same vault as her half-sister, Mary I. 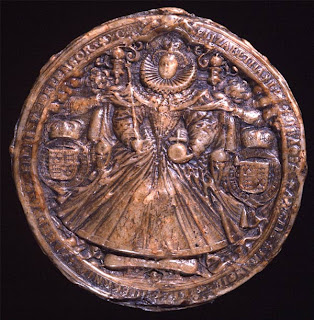