Charles V (1337 – 1380), son of King John II the Good became the first French heir apparent to bear the title of dauphin after the area of Dauphine was added to the royal domain in 1349. Charles became the kingdom’s regent while he was still in his teens after the English captured his father at the Battle of Poitiers in 1356. As regent he dealt successfully with the revolt of the Jacquerie and the popular uprising headed by Etienne Marcel, who armed Paris against royal rule. 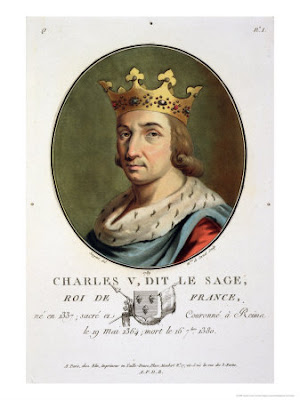 Charles entered into negotiations for the release of his father and was forced to agree to the treaty of Bretigny, which ceded large amounts of southwestern France to England and demanded a ransom of three million gold crowns for the release of the king. After Charles became king in 1364, he cracked down on the marauding bands of discharged soldiers who had been ravaging the countryside and adopted a tougher stance toward the English.

With guidance and support of general Bertrand du Guesclin, Charles restored order in the French countryside and strengthened royal authority by assembling an army and a royal navy. He won back much of the land he and his father had been forced to cede to the English. He also reformed the coinage and instituted financial reforms that gave the crown greater fiscal authority.

Charles earned the title “the Wise” because he was a patron of the arts. He established the royal library and renovated the Louvre. During the last year of his life, he sided with Pope Clement VII against Pope Urban VI at the beginning of the Great Schism. He died in 1380 and was succeeded by his son, Charles VI.