An enormous hoard of gold, unearthed in a field near the village of Hammerwich, near Lichfield, in Staffordshire, UK, on 5th July 2009, is proving to be one of the most astonishing European archeological discoveries for decades.The find, discovered by an amateur metal-detecting enthusiast Terry Herbert – comprises more than 1,500 items, amounting to more than five kilogrammes of gold and including remains of 84 sword pommels, three crosses and several helmets. This compares with the 1.5 kilogrammes of gold in Sutton Hoo in Suffolk – previously the largest Anglo-Saxon treasure trove ever discovered.

The great burial of a prince or king, it was unearthed in 1939. A large mound was found to contain a 90-foot-long wooden ship complete with a central burial chamber. This chamber was once furnished with textiles and contained the dead man’s possessions, including magnificent gold and garnet weapon fittings and a striking paneled helmet.

To be more precise, The Staffordshire Hoard totals 5.094 kilos of gold, 1.442 kilos of silver and 3,500 cloisonné garnets. In total, the Hoard contains 3,490 metal fragments. 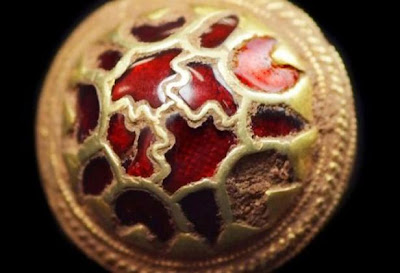 The Staffordshire finds appear to date from the same period as Sutton Hoo (the seventh century) and suggest that the concept of the Dark Ages – where culture was suppressed drin an extended period of unrest and upheaval – is a misplaced one.

On the contrary, the intricacy and craftsmanship of the finds and their similarity to those of Sutton Hoo suggest north-western Europe was a place that was home to a refined and complex culture.